The New Orleans Museum of Art will celebrate LOVE in the Garden presented by Hancock Whitney on September 27, 2019. Now in its fifteenth year, guests will enjoy cuisine from more than sixty of New Orleans’ finest restaurants, and craft cocktails from New Orleans’ top bartenders as they vie for first place in the sixth-annual LOVE Cocktail Challenge. Local New Orleans food trucks presented will provide late-night fare to keep the party going into the evening.

For the first time, this year’s event honors distinguished patrons Sydney and Walda Besthoff. As two of New Orleans’ most dedicated patrons of the arts, the Besthoffs’ generosity toward NOMA resulted in the realization of the Sydney and Walda Besthoff Sculpture Garden, which has been the home to LOVE in the Garden since its inception, and the new 6.5 acre Besthoff Sculpture Garden Expansion, featuring twenty-seven works of contemporary sculpture.

“For over twenty-five years, Sydney and Walda Besthoff have built a legacy through their extraordinary record of devotion to supporting the arts and culture of New Orleans, and especially at NOMA,” said Susan Taylor, NOMA’s Montine McDaniel Freeman Director. “We are delighted to honor them on the fifteenth anniversary of LOVE in the Garden.”

Event co-chairs Julie and Ted George, Cammie and Charles Mayer, and Aimée and Mike Siegel have worked collaboratively and devotedly on all details of the event, ranging from selecting entertainment to securing 60 participating restaurants.

For the first time, the LOVE in the Garden Patron Party will take place in the Besthoff Sculpture Garden expansion. Kicking off the evening at 7 pm, Patron Party guests will enjoy entertainment by the NOCCA Trio, with a special appearance by the 610 Stompers presented by Sazerac Company. The Patron Party is followed by the Garden Party from 8 pm to midnight, with entertainment by Nola Dukes. The evening is presented by Hancock Whitney.

“Hancock Whitney is proud to serve as the presenting sponsor for NOMA’s LOVE in the Garden,” said Gary Lorio, Hancock Whitney Regional President. “It’s a privilege to partner and work with NOMA, our city’s oldest fine arts institution.  This festive event celebrates the arts and culture of our great city, and we are honored to support NOMA and the work it is doing to protect and preserve its permanent collection of more than 40,000 objects for future generations.”

LOVE in the Garden is a celebration of the sixteenth anniversary of The Sydney and Walda Besthoff Sculpture Garden, and inaugural year of the Besthoff Sculpture Garden expansion. The sculpture garden has been free to the public since its opening in November 2003, and is one of the most popular public spaces in New Orleans for locals, students, and tourists. Proceeds from LOVE in the Garden help to guarantee the future stability of the museum and programs that are vital to the New Orleans community, and beyond. 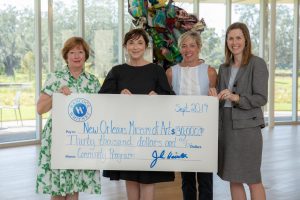 The Patron Party features cuisine presented by Commander’s Palace with support from the New Orleans Culinary and Hospitality Institute (NOCHI) in the Sculpture Garden Expansion.

Entergy is the Gold Sponsor of the event.